ANOTHER GREAT REVIEW FOR DOUBLE DECEPTION --KEEP THEM COMING, (PLEASE!) 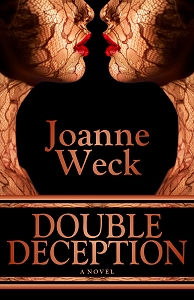 A Great Read
By Bsby on October 31, 2015
Format: Paperback Verified Purchase
This book was a delightful surprise. It grabbed me from the first chapter, and then I couldn't put it down. This author has a masterful command of dialogue which helps make the characters feel real and fully formed. There is a very real sense of suspense in this story which slowly builds throughout the novel and then bursts into a satisfying climax in the final chapter. The story concerns a young woman who discovers there is someone out there who is her exact duplicate, and somehow their lives are intricately entwined. . All in all, this is a great read. I can't wait for Ms. Weck's next book.
Posted by Joanne Weck at 8:24 AM No comments:

FORT LEE, N.J. — It's no coincidence that Fort Lee author Joanne Weck's latest novel takes place in both Manhattan and the Poconos. The former teacher splits time at her borough home during the week and the Poconos on weekends.
“I watch the bear come wandering down the dirt road, watch the birds in the feeders -- and squirrels,” said Weck, whose novel, "Double Deception," was published in early October.
Writing has always been her escape. “I grew up in a family of 10 kids,” Weck said. “I was the poet, I was the writer, I put on plays for grade-school classes. That’s how I got the attention that I needed.”
Her mother rocked her younger siblings to sleep by singing nursery rhymes. It stoked an early interest in poems and rhymes.
“I started writing at 6 or 7,” Weck said. “I wrote almost continuously throughout my life.”
Weck is nothing if not versatile, having worked in Lakewood, Linwood, Tenafly, and Union Township teaching "all the exciting courses," she said, "creative writing, theater arts and TV production, as well as English.”
After retiring in 2001, she found she missed working with youngsters and took up part-time tutor work for Fort Lee.
Weck continued to find time to write poems, produce plays while she taught. She even interviewed celebrities such as Michael Jackson as an editor for Scholastic Magazine.

The fast-paced "Double Deception" is set in and around Manhattan with scenes in a deserted cabin in the Pocono Mountains.
The plot involves a pair of twins, separated at birth, who know nothing of one another’s existence until each is kidnapped in Manhattan. Held by dangerous criminals, they discover one another and escape by combining their ingenuity and courage.

Weck already has completed another novel that is due to be released in January.
But she's also still feeling the thrill of her latest release.
“I didn’t believe it was real until I was holding the paperback last week,” she said.

Posted by Joanne Weck at 3:20 PM No comments:

My First Review for DOUBLE DECEPTION

"...an exciting book about a young woman's plight when she realizes someone in New York City who looks exactly like her--has been kidnapped. The book kept me entirely in suspense as Fallon, the heroine, tries to understand what is going on in her life. I really like how the book gives you a peek into another person's life and urges you to want to see how circumstances are going to play out for her. The author Weck does a very good job in setting the book in New York City, in northern New Jersey and the Poconos. The book has fresh twists and turns that surprised and grabbed me. A most satisfying read." -- Marge Carson

Posted by Joanne Weck at 1:17 PM No comments:

THE WORST MOMENTS OF YOUR LIFE (MAKE FOR GREAT DRAMA)


“You think your pain and your heartbreak are unprecedented in the history of the world, but then you read. It was books that taught me that the things that tormented me most were the very things that connected me with all the people who were alive, or who had ever been alive.”
― James Baldwin


Tragedy, heartbreak, and pain do not make life richer, except perhaps for the relief of having survived with a deeper appreciation of everything you STILL have. My life has not been awash in unusual suffering. I've never survived a tsunami, an earthquake, a fire, or a shooting rampage.

But that doesn't mean I can't identify with those who have, or imagine myself in a similar situation. As a writer, I use the pain and suffering, the fear and shock that I've experienced to enrich and develop the characters in my novel.

I've felt the loss of people I loved, parents, a sister. I've lived through a painful divorce, financial disaster, a near death from an ectopic pregnancy. I was stalked and threatened by a mental patient who fixated on me.

One peculiar aspect of being a writer is the ability to be inside and outside of the experience at the same time. I remember as a child during moments of rage or sadness becoming aware of a separate part of myself observing and recording everything I was feeling. In the most dire moments (once, for example, as my car spun through the air after being sideswiped by a truck) I caught myself thinking, "This will be great to write about. Time actually does slow down. If I live through this, I'll use it in my novel."

When I'm writing a scene that demands intense emotions I can easily recall desires and emotions of my own life. (Not that I've ever murdered anyone--but I know what murderous rage feels like.) Devastation, hate, love, joy, feel the same no matter what the circumstances.

Tapping into the emotions, sense memory according to acting principals, help me, as a writer, recall the physical sensation of these emotions and transfer them to the characters as I create them.
Posted by Joanne Weck at 7:51 AM No comments:

FEAR IS WHAT HOLDS US BACK FROM OUR CREATIVITY. 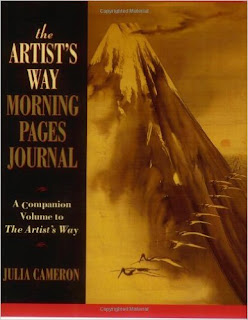 One of my favorite inspirational writers is Julia Cameron, author of several books on the creative process including The Artist's Way, Walking in This World, Finding Water, and The Complete Artis's Way. She is a prolific creator in many fields, including film, poetry, memoir, as well as her inspirational books for every artist.

One of her ideas that strikes me as deeply true is her belief  that procrastination (and/or the condition known as "writer's block) is the result of FEAR.  What can cause a person who truly wants to write (or draw, paint, sculpt, film, dance etc.) to freeze before the page or artistic material? What turns an artist's desire for expression against herself?

ACCORDING TO CAMERON, FEAR IS AT THE HEART OF SUCH PROCRASTINATION.

Her advice: before you start a new project, ask your artist (i.e. that inner creative part of yourself) several questions, including what resentments or angers you are holding in regard to the project, any fears, and what you stand to gain by NOT tackling the project.


Another part of Cameron's cannon is the daily mental "dump" called Morning Pages. She urges any creative person to make this a daily practice, simply write, no censorship, no second thoughts, no concern with grammar or spelling or structure. This practice, according to Cameron, frees the mind and dissolves writer's block.
I've attempted to incorporate this practice into my writing life, but I confess, I don't always follow through. But when I feel blocked I open one of her books and her writings inspire me and activate me.
Posted by Joanne Weck at 5:00 AM 1 comment: