How far should a writer go in "borrowing" from others? When does "BORROWING" veer from inspiration to transgression?

Watching Blue Jasmine, Woody Allen's beautifully realized adaptation of Tennessee William's Streetcar Named Desire,  my sense of deja vu was so strong  that  I expected the Stanley character to fall on his knees at any moment and bellow"Stella!" In the final moments when the Blanche clone sits alone on a park bench mumbling to herself, I anticipated the arrival of a white-coated doctor to whom she would murmur, "I've always depended on the kindness of strangers."

It's a respected practice to find inspiration in another writer's work, to adapt, or update a great story. The account of the great flood in Gilgamesh was retold in the Old Testament as the story of Noah, and the Bible, itself, has been an inexhaustible treasure trove for character and story. In East of Eden, Steinbeck powerfully updates the story of Cain and Abel and many other stories have been reinterpreted, updated, or re-imagined. Movies famously adapt or reinterpret. Clueless cleverly updates Emma, one of Jane Austin's most beloved novels.

Still I find myself questioning the legitimacy of adaptations that so completely follow the character development, themes, and plot of the original work. When is it homage and when is it outright theft?

You think about it while I get back to my writing--a novel inspired by WAR AND PEACE.   WRITE ON!
Posted by Joanne Weck at 6:44 AM 2 comments:

WRITING FOR YOUR LIFE (AND SANITY) 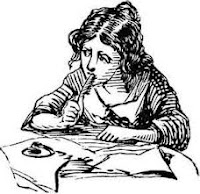 “Writing is a form of therapy; sometimes I wonder how all those who do not write, compose, or paint can manage to escape the madness, melancholia, the panic and fear which is inherent in a human situation.” ― Graham Greene


Today I'm considering the ways writing for oneself are valuable.
Psychologists and psychiatrists as well as students of human nature agree that simply formulating and penning (or typing) one's thoughts and feelings is therapeutic. The desire to share what has come from your mind is another choice and may have different outcomes, but most writers agree that they write for themselves first.


It starts with this: put your desk in the corner, and every time you sit down there to write, remind yourself why it isn't in the middle of the room. Life isn't a support system for art. It's the other way around. —Stephen King

The aim of art is to represent not the outward appearance of things, but their inward significance. —Aristotle

Did you ever admire an empty-headed writer for his or her mastery of the language? No. So your own winning style must begin with ideas in your head. —Kurt Vonnegut

In short, you have only your emotions to sell. This is the experience of all writers. —F. Scott Fitzgerald

To live a creative life, we must lose our fear of being wrong. —Joseph Chilton Pearce

Writing--and this is the big secret--wants to be written. Writing loves a writer the way God loves a true devotee. Writing will fill your heart if you let it. It will fill your pages and help to fill your life. —Julia Cameron

A written word is the choicest of relics. It is something at once more intimate with us and more universal than any other work of art. It is the work of art nearest to life itself. It may be translated into every language, and not only be read but actually breathed from human lips; not be represented on canvas or in marble only, but be carved out of the breath of life itself. —Henry David Thoreau

I'm sharing these insights today to remind myself of why I write. WRITE ON!

HOW TO BE A SUCCESSFUL WRITER


“A man is a success if he gets up in the morning and gets to bed at night, and in between he does what he wants to do.” ― Bob Dylan 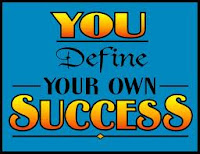 How do I define success? Not as the world might define it. If I feel successful, then, to my mind I am successful. If I am spending my time (or at least a good part of my time) doing what inspires me and makes me happy, then I am successful.

I'm not saying that there aren't publicly recognized signs of success-- sales records, public acclaim, great reviews, film adaptations, fans who wait breathlessly for the next book, and a six-figure income.

I choose to label myself a successful writer because I am enjoying my writing life every day. Perhaps someday before I die I'll hit major, recognized success as a writer (a la J. K. Rowling) but even if I don't, I count myself lucky to be able to write and so I declare that I AM A SUCCESSFUL WRITER! Join me and shout out loud and clear: I am a successful writer! WRITE ON!