REFUELING--COFFEE? WINE ? OR A FIRECRACKER?


Some days two cups of coffee won't wake my Writing Genie. Some evenings a glass of wine won't mellow her out. Some days I feel like the tank is empty and the engine won't turn over. My inner critic whispers, "Take a day off. You've run out of fuel."

I sit at my computer, nonetheless, perhaps rereading previous chapters, perhaps writing gibberish, until my imagination stirs and new ideas blossom. But sometimes a writer needs more--a dynamic reminder of what the writing life is all about and why we do it. A chance to be inspired by someone who reminds you of why you started down this journey in the first place, and the joys that come with creation, even if it's only for yourself.

Just look at the face, that smile--you can tell she's a human dynamo. She offered insights, practical advice, solicited questions, and for two hours, that electric energy never flagged. It sent sparks out to the audience, all writers who were eager to be inspired. I could feel the current of creativity spark around the room. I have no doubt that each of us went home with renewed excitement and energy and sat down at our computers with fresh resolve. (I, for one, wrote the entire first draft of a new one-act play!)
Posted by Joanne Weck at 10:15 AM No comments:

A TRIBUTE TO AN ARTIST 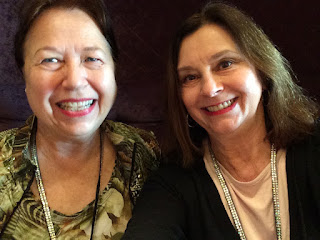 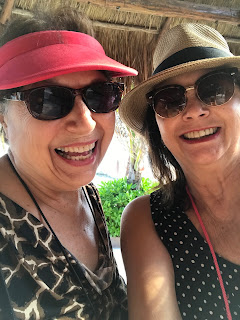 It's important to have someone in your life who always has your back. Who believes in your talent. Who encourages you when you become discouraged. Who celebrates with you when you succeed. I'm lucky to have a friend like this--someone I've known since college days, when we were both students at the University of Pittsburgh.I've always admired her self-confidence as well as her talent. She's a brilliant artist (and teacher.)  She shares her knowledge generously. She volunteers for those in need. She promotes her fellow artists and her friends.
Though distance separates us, we make the effort to spend at least one week a year together, usually on a cruise to somewhere exotic. We catch up on our lives, she paints, I write. She can dash off a brilliant water color in thirty minutes, and then give it away to someone who admires it. I watch her work with awe. 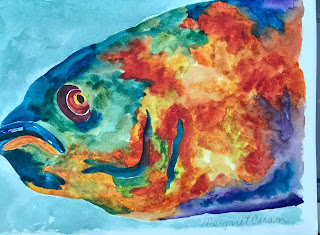 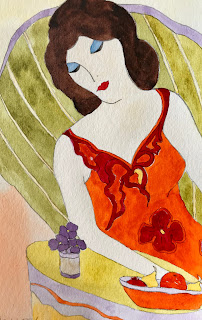 She's the friend I call when I have news, good or bad. I'm the friend she calls when she has news. We share one another's tragedies and successes. Every writer, indeed, every human, needs a friend like this in her corner.


Artwork for sale by Margaret Carson. Margaret Carson is a professional artist well known for her artful landscapes and seascapes, with a studio in Houston Texas. She is trained at Carnegie Art Institute of Pittsburgh and at the Art League of Houston. She has a bachelor of arts... 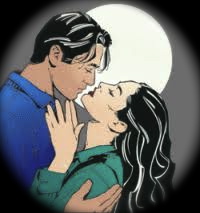 Writing scenes that portray or even suggest a sexual encounter can be difficult.  Just show? Just tell?  Show and tell?

My characters are driven by many forces.  I believe that makes for a story that people want to read. Sexual attraction is a vital part of the life of any well-rounded character. A prime motivator that drives mystery and suspense. Lust. Jealousy. Suspicion. Theft.  Manipulation. Betrayal. Greed. Murder. Some of the qualities that contribute to a page-turner.

I've been faulted for creating characters that aren't "likable" or like Hilary, "likable enough." It is my belief that certain characters, and not just villains, are more interesting if they have minor (and sometimes not so minor) flaws.

The characters in my latest novel, RIMA AND CHLOE, the major characters are guilty of various sins and offenses--adultery, selfishness, greed, rage, betrayal.  A supporting character is revealed as a murderer. But until the denouement, he appears more sympathetically than some of the major characters.

In Rima and Chloe the adulterous love affair jumpstarts and drives the plot. Lovers betray spouses and sometimes deceive one another. But, I do believe, it is in the cause of a deeper understanding of human nature, and the ultimate redemption of the characters.
Posted by Joanne Weck at 5:50 AM No comments: 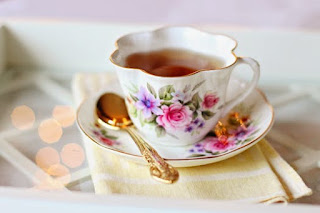 I can't say I love winter. But who doesn't love the first snow, so pristine, making everything pure? As a girl growing up on a farm in Pennsylvania,  for me, that white blanket extended unbroken for miles in every direction, coating the fields, the buildings, the trees. I loved sledding with my older brother,  hurling down the big hill behind the barn at breakneck speed. I loved building snowmen and igloos and I enjoyed snowball battles. Best of all was when my father hooked the huge workhorses to an old-fashioned sleigh and took us spinning across the fields.

But these days, in suburban New Jersey, the magic remains only for a few hours before exhaust fumes, pollution, salt and dirt and shovels turn snow into disgusting slush and black mounds that remain long after the rest of the snow melts.

Still there are advantages for a writer. The cold weather keeps me inside, settled at my desk, a cup of coffee before me--WRITING!

I've been inspired on these cold days. I've been working on a new series, and I've written twelve chapters in record time. So there has been an upside to the weather that keeps me indoors. I'm enthused, living in a world of summer with a new cast of characters.

Okay, I cheated a little--a sojourn to California, a Caribbean cruise--but still--it's cold, it's winter-- and I'm writing today. (I plan to fly t Florida on Tuesday.) But once the story starts unfolding--it's a process!
Posted by Joanne Weck at 8:02 AM No comments: