Recently I came across a newspaper photo of actors who had appeared in the movie Goodfellas--and it occurred to me I had personally met two of them--Ray Liotta and Paul Sorvino. This led me to review the famous people I have met (however briefly) over the years. Here's my list:

1. Ray Liotta—I met him when he visited my roommate at a house we were renting in Union, NJ. He had grown up in that town. My roommate had been a student-teacher in the Theater program while he was a student at the local high school and he came to see her.


Since I had also studied acting at The American Academy of Dramatic Arts, and had appeared as an extra on the soap "Another World", we had a pleasant conversation about acting as he sat in my kitchen and shared coffee and cookies. He was handsome and polite and he joked with my six-year-old son who had also acted in a  few commercials.

I met Ray again years later when he returned to Union High School for a day of celebration--Ray Liotta Day. By that time he had become famous. The red carpet was rolled out for him and many festivities planned.

As the then current Theater teacher at his alma mater, I invited him to re-enact a scene from a play he had appeared in as a student, with some of my young theater students reading supporting roles. He dismissed the suggestion out of hand. He spoke only to a large group in the gymnasium. During his talk he asked if a certain teacher was still at the school, and followed the answer with a put down. He told the kids he had succeeded  without going to to college and generally denigrated his high school experience. Apparently the students were not impressed with his visit. His photo plaque mounted in the school foyer was defaced within the week.

2. Paul Sorvino--He came to speak to my Theater students when I was teaching at Tenafly High School in Tenafly, NJ. (His daughter attended the school.) He was warm and charming, friendly, and accessible. The students asked many questions and he talked with them at length.   I met him again years later when I'd been awarded a Geraldine R. Dodge Fellowship for Teachers and Playwrights. He graciously claimed he remembered our previous meeting and posed for publicity photos with me.

3. Michael Jackson--I interviewed him for Scholastic Magazines when I was working as an editor there.  He was sweet, innocent, and idealistic. I left the recorded interview at the magazine office when I departed, but I wish I’d made a copy.

4. Cliff Roberson--star of many old movies such as Charly and PT 109. I met him first by accident at a studio in Manhattan when I was waiting to audition and he was waiting to have his makeup done for a public service commercial. He looked to be about sixty-five, weathered, but very healthy and tanned. (I was in my thirties.) He asked me if I were the make up artist. I confessed I wasn't. He initiated a friendly chat and invited me to submit resumes for my son and me as extras for a film he would be making called Morning, Winter and Night, based on a Sherwood Anderson short story. I called my manager that afternoon.

The next day I received a strange telephone call from Mr. Robertson. He asked me many personal questions, as though vetting me for something more than an "extra" on the film. He asked about my family, where I had grown up, my maiden name, my marital status and chatted in a friendly manner.

On location (Deerfield, Mass.) however, he only nodded when he saw me.I wondered if I had failed some test. Still, my son and I had a wonderful time, staying at the Deerfield Inn and shooting scenes in the snow. The film never got completed due to some union problem. However, on the shoot, we met Brooke Shields, who was the star. 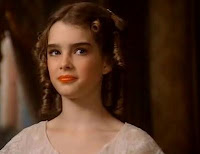 5. Brooke Shields--She was young, sweet, and very lovely. Her mother accompanied her, as did her mother's entourage. Brooke joked with my young son and endeared herself to the entire cast, made up mostly of young people. In the late afternoons, after shooting, she sat signing photos while her mother watched. I had the impression that she was her mother's caretaker rather than vice-versa

6. Olympia Dukakis--She sponsored a woman's playwriting seminar at the Whole Theater in Montclair, NJ and occasionally stopped by to hear us read scenes from our work. When she won an Oscar for Moonstruck she invited the group to a dinner at her home in Upper Montclair, NJ. We ate sphagetti and meatballs and drank a toast to the most generous and welcoming host.

7. N. Richard Nash--playwright, author of The Rainmaker. He spoke to our group at Princeton and generously posed for publicity photos.